This is an article from a new publication titled Farmers & Friends.

“GMO Warrior.”  That is how David Makaiwi of Molokai describes himself nowadays. It’s an identity thrust upon him by unwanted political circumstance. On November 4th, a county ballot initiative proposes to ban the growth, testing or cultivation of genetically modified or engineered crops throughout Maui County, including Molokai.

The proposed moratorium would extend until such time as an environmental and public health study and the Maui County Council determine that GMO crops and field operations are safe and harmless. It is the first initiative ever attempted in Maui County, where the initiative power was granted through its charter in 1983, and its implications are huge.

For David Makaiwi, the moratorium, if adopted, could render him a man without a job.

Makaiwi now finds himself defending modern agriculture for the next generation, to assure his children access to careers that will allow them to stay on the island he loves.  He is a dedicated husband, father, and employee. He’s been with Monsanto for nearly 15 years.  Many of his co-workers have been with the company for decades.  As the November vote looms, he is a man baffled by his predicament. “The seed companies have been around for more than 50 years,” he notes.

Monsanto gave David Makaiwi a second chance in life.  Growing up on 40 acres of Homestead land taught him how difficult a farming life can be. It required long hours and hard work.  He didn’t care for it as a child and struck out on his own.  He ended up having trouble with the law, drugs, and even spent time in jail.  It was a wake-up call. With the support of his wife, who stuck by him through the hard times, he chose to put the past behind him.
“Now this is where Monsanto comes in to our life, because all I knew was the farm life,” he recalls “Where better to go [than] with a farming company?”

David started his career in the seed industry as a pollinator. He earned his pesticide applicator’s license and worked in that capacity for seven years before becoming the Field Operations Lead. 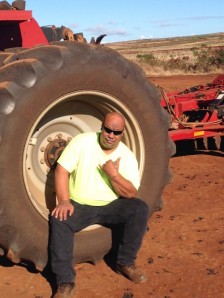 “I didn’t pay attention too much to activism,” he says, “but now that’s all you hear is, ‘GMO this and GMO that’.  Now it’s time to protect my job… Even if I hated to work hard on the homestead, I came back to a modern way of farming through Monsanto and with all that is going on with the issues over GMOs, I have to defend it for my next generations that will come after me.”

The homestead lands that David grew up on face a major water cost increase if the GMO farming ban is voted into law.  The revenue of the Molokai Irrigation System (MIS) stands to take a direct hit if the seed companies can no longer do business on the island.  Currently, homesteaders get 2/3 of the water rights based upon actual need, but provide only 20% of the revenue for MIS.  Commercial use of MIS supplements that by paying the other 80%.  Non-homesteaders are also the first to have to cut back water use in a drought situation.  If Mycogen and Monsanto are no longer available to help sub-sidize the cost of the irrigation system, homesteaders may find their wallets pinched by an increase in water costs.

Homesteaders aren’t the only ones facing financial problems.  The businesses of Molokai see the seriousness of the situation ahead.  Rob Stephenson, President of the Molokai Chamber of Commerce, is well aware of the dire future presented. “We just visited Ed Wond of Napa Auto Parts,” Stephenson said.  “Some 30% or better of his revenue comes directly from the two seed companies.” Mark Wond of Napa elaborated, “Oh, it would drastically affect us.  It would affect our whole island.  Every vendor on the island would be hurt by this.”

Dawn Bicoy, Community Affairs Manager of Monsanto Molokai, ran some rough calculations on how jeopardizing 250 jobs on the island would affect gas stations, just one sector of the economy.  She concluded: “Two hundred fifty people, say, with an average gas purchase of $100 weekly (gas is currently $5.99/gallon) times 52 weeks amounts to over $1M a year in lost sales at our gas stations, and on a small island with a small economy, this is just one example of the severity of the impact.”

Rob Stephenson feels it isn’t just businesses that will suffer, but schools and social services as well.  Families may feel the need to leave the island to find jobs.  “If they take their families, school enrollment drops,” he says.  “School enrollment drops and the money allotted for the schools goes down.  At what threshold can the public schools provide a proper and adequate education based upon the lack of funding?”

Education is an important part of life in the Hawaiian islands — from the public school system to the University of Hawaii to the learning gained from kupuna.  Judson Laird, a Monsanto nursery supervisor, turned his passion for agriculture into a free education.  It has given him a global perspective on what his job entails.  “If Monsanto is pushed off this island,” he says, “it will affect people here, and around the globe. This company discovers more productive ways to grow healthy crops from the rich, fertile soils in Iowa to the hard-baked lands of South Africa.  Monsanto seeds survive droughts and hardships to feed multitudes.  For me personally, I will lose a job I feel has allowed me to impact the world for good, and helped me to ease the suffering of many people.”

Monsanto employee policy allows individuals with aspirations of attending college in an agricultural field to get their degree on the company’s dime. Judson was encouraged to enroll and is now taking classes at UH.  If the ballot initiative is adopted, not only would Judson lose his source of income. He would lose opportunity to further his education.  When asked about what worries him should the initiative pass, he showed equal concern for people around the world.  “I hope the voters of Maui County will examine the facts and judge what is best for this island,” he said, “and the many people around the globe who depend on the seeds grown here.”

Crisian Velasco shares Judson’s deep concern for neighbors, and a passion for education.  Her mom and brother both work with her at Monsanto on Maui.  The company has been part of her family’s life for 14 years.  When she graduated from Maui High, she knew the finances were not available to allow her to work toward her long-standing dream of becoming a Registered Nurse. It wasn’t until she followed her mother’s footsteps and found employment with a seed company that she realized she made enough money to see to her needs, as well as begin college.

She has completed three years of her nursing program and has two to go.  Not only is she able to do this for herself, but for her younger siblings as well.  “Every paycheck, I put aside just enough for my 16 year old sister to go to school, because I don’t want her to have to go through what my siblings and I went through, where she so much wants to continue school and wants to achieve that goal but can’t because of finances.”

Multiple generations at one company are common in Hawaii.  Mildred Basilio and Florence Cuaresma have desks near each other in an office at the Mokulele site on Maui.  They share more than office space, however.  Both have multiple generations of their families working with Monsanto, and both value the benefits that come with their jobs.  Florence comments, “It’s hard to find a company like Monsanto that gives the highest priority to the safety of their employees and with very good benefits!”

Mildred’s parents worked these fields for 18 years and have since retired to enjoy time together.  She and her husband recently were able to purchase their first home.  Her paycheck contributes a lot to paying the bills.  “This simple house I dreamed of with my husband and my son may be lost all of a sudden.  It’s very painful for me to think that our entire earnings through our hard work will be lost for nothing.” 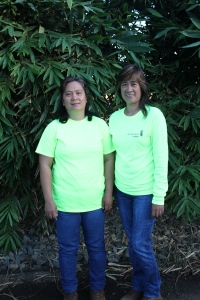 Please consider a subscription to Farmers & Friends if you like what you see.

One thought on “GMO Warriors”