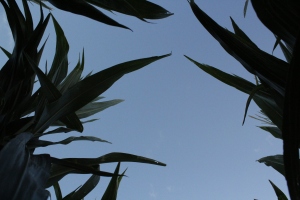 If you live in Maui County, and you woke up this morning wanting to plant a field of sweet corn, you would likely want to grow a Bt variety that would decrease your insecticide use by around 85% and allow you to use less fuel in your tractor.  You might also want to think twice.

As of November 5, 2014, that Bt sweet corn is now illegal in the County of Maui.  If you choose to grow it anyway, by Friday you could be in jail for the next year and owe almost $100,000 in fines.

This goes for the Rainbow papaya (or any GM crop) as well.  The Rainbow papaya is the fruit developed by Dr. Gonsalves at the University of Hawaii.  Its claim to fame is its ability to fend off the dreaded Papaya Ringspot Virus.  There is no more disease-free papaya allowed in Maui County.

The “Yes” vote, to ban biotechnology, won the initiative with 50.2% of the votes.  A very narrow margin.  Today begins the battle to show the flaws in this piece of legislation.  I don’t have a law degree, but I can see a few distinct problems with this legislation already:

1) Section 2 is a long list of half-truths.  This doesn’t change the legality of the law, but it certainly speaks to the integrity of the authors.  Harold Keyser, Ph.D. did a point by point analysis of this section, and it is fantastic.

“The passage of any proposed amendment or repeal of the Temporary Moratorium for any such GE Operation or Practice under this Section shall require: (1) County Council and citizens review of the EPHIS as detailed in Section 8.2.a; (2) a public hearing; (3) the affirmative vote of at least two-thirds (2/3) of the council membership;(4) a determination by the County Council that passage of the amendment or repeal pertaining to such GE Operation or Practice does not result in significant harm and will result in significant benefits to the health of present and future generations of Maui citizens…”

Plus, growers now have to not only show that their practices are safe, but that they are downright healthy for residents.  Organic farming would not hold up under these requests.  In fact, I don’t know any business that would.

3) Section 7.3 outlines what evaluations need to be done by the grower:

(a) Transgenic Contamination from GE Organisms to non-GE organisms may occur;

(c) Pesticides associated with GE Operations and Practices used both as single Pesticide and as Pesticide combinations may contaminate the groundwater, surface water, oceans and reefs;

(d) Pesticide laden air and dust from GE Operations and Practices may be harmful to the people and Environment;

(e) Pesticide combinations associated with GE Operations and Practices resulting from two or more Pesticides are applied at the same time or within their period of active life (“Pesticide Cocktails”) have or have not been tested for safety and the extent to which they may be harmful to the people and Environment;

(f) Horizontal Gene Transfer from GE Organisms between organisms of different species may occur; and

(g) there is any correlation between birth defects and the proximity to extensive GE Operations and Practices occurring in Maui County and Kauai County.

Never mind that there is no evidence of any of these things happening right now.  Never mind that regulatory agencies have already approved the use and cultivation of these crops.  Never mind the 2000+ independent scientists already telling us these products are safe.  Facts mean nothing to the authors of this initiative.

Those things aside, the worst part of this section of the law is (g).  Farmers on Maui must prove that GM practices on Kauai are not causing birth defects, even if a farmer has no business operations on Kauai.

4) Section 7.4: “In the second part of the process, the EPHIS shall be conducted by a non-biased professional consultant independent of GE industry ties with oversight by the JFFG…”

On July 1, 2014 (page 104), Mr. Pang (one of the authors of the initiative) was asked by Councilmember Guzman, during testimony, “Where is the ultimate authority to finally say this company is released from the temporary moratorium?”

Mr. Pang responded, “First of all, it would be as far as I understand and which I’d influence, it would be released on a product by product basis. It won’t be a company. They got product X, we’ll release it or not. To call the committee together is not that hard. I can tap onto friends and volunteers who review for the Congressional Delegation, they owe me, I owe them. We have many international people. We would try to keep it fair so they’re not either for or against it and they certainly won’t have financial conflict of interest one way or the other. The five people, as I understand it, can vote to release it or not. It is essentially a de facto EIS.”

People that owe one of the activists involved in this initiative will be conducting this study and releasing companies/products from this moratorium?  Maybe not so “non-biased”.

These are just a few thoughts from a non-lawyer.  Imagine what an expert in the law will see when reviewing this initiative!  Overall, the biggest problem I see is an unfair targeting of farmers using GM technology.  There has been zero proof of harm.  Since when are farmers guilty until proven innocent?