The blue one served the family well until 1976 when it was parked in the weed patch out back.  In 1981 my oldest brother turned 16 and dragged it out, restored the engine, and installed wall to wall carpeting and huge speakers in the back window.  That was my seat – lying across the speakers while the entire high school basketball team filled the rest of the cab.  It was loud and smelly, but I know every word to ‘I Shot the Sheriff’.

When I was 9 years old I had great dreams of turning 16 and cruising around town in that carpeted wonder-mobile.  It wasn’t meant to be.  I was horrified as I watched out the playroom window, my dad handing the keys to some woman.  I believe his comment was something along the lines of, “No daughter of mine is going to drive around in a 30 year old vehicle that might break down on some deserted road.”  As the parent of a freshly minted 16 year old daughter, I understand this comment considerably more now than I did at the age of nine.  I realized there was no arguing my way out of this one, and silently vowed to one day buy my own Volkswagen – Scarlett O’Hara style.

Life marched on and marriage and babies and a mortgage happened.  I figured there wasn’t much point in thinking about a bug anymore.  I was working on building up my fruit farm and fixing up our farmhouse, and a classic car just wasn’t practical.  Until one day we realized we needed a delivery vehicle for farmer’s markets, and the beginnings of an idea took shape. 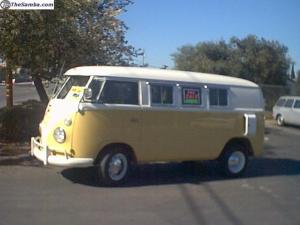 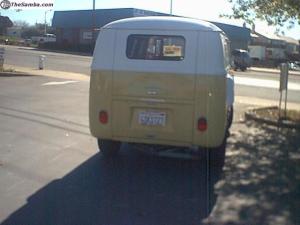 I stumbled across a site called The Samba and saw exactly what I was looking for… in San Francisco.  I talked to the owner, but had no idea what questions to even ask.  In comes Wally of Joetown Garage.

Joetown Garage has been around since cars became popular, and the emblem has been seen around the country by fans of the show American Pickers.  Wally graciously agreed to talk to the man from San Francisco, and declared the bus a worthy investment.  Two weeks later it arrived in Iowa smelling of herbs and sporting a plaque that said:

If only those floor-boards could talk.

I didn’t want to be one of those people that had someone else do all the restoration work on their old vehicle, so I made a sheepish phone call to Joetown Garage one night.

“Would it be OK if I came in each morning and did some of the easier tasks in getting the bus restored?”

I fully expected to hear a hearty laugh on the other end of the phone, but not Wally.  I showed up for work the next week.  Granted, these were light tasks, but it was fun to be there, soaking up the smells of a working garage and learning how to replace windshields and accelerator cables. 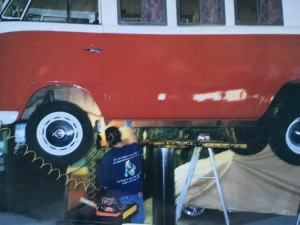 By the end of the week, my babysitter went on strike and I sadly told Wally my fun in the garage was over.  To my amazement, he suggested that it would be OK to bring the girls in the next morning and see how things would go with two tiny people underfoot.  The girls were fairly well behaved kids, but most importantly, they were movie deprived.  They spent the next 2 weeks watching movies  in the backseat of a bug that was under restoration, and I got to keep playing with my new toy.  Wally reached saint status in my book from that time forward. 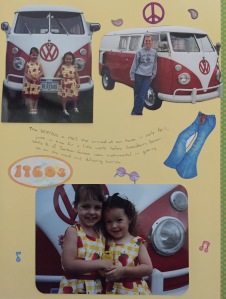 The bus was ready just in time for the first strawberries that spring.  My husband built these great shelves for the back end and we could now easily haul 2 kids and 100 quarts of strawberries to the nearest Farmer’s Market.  I had plans to travel all over southeast Iowa for various markets, but I never needed to as demand was rather high just 10 miles from home.

The bus, besides making me very happy, made a great marketing tool.  Wellman Iowa doesn’t have a large hippie subculture, and heads would poke out of windows when we rolled into town.  How could they not, that bus is LOUD!  I remember one woman, also a California transplant, came running out of her house the first time I drove through town.  She was ecstatic to see an old bus.

“I lived in one of these in San Francisco one year.”

Of course you did Trudy.  Perhaps this one?

The move to Hawaii seemed a better fit for the bus.  The farmers of Iowa raised many an eyebrow at its presence, but in Hawaii, it just gets shakas.  As it was off-loaded on Oahu, one guy offered me twice the money I’d invested in the thing if I’d sell on the spot.  You don’t sell your children sir, no thank you.

Just before the big move across the Pacific, Wally rebuilt the engine and installed a new/rebuilt transmission.  The bus ran like a dream until just a few weeks ago.  A little stalling at the lights in town told me an adjustment might be in order.  Four-hundred dollars later, I was informed that the last mechanic (meaning Wally the VW guru) had put the spark plugs in wrong and that I needed a new engine and transmission to the tune of $5,000.  I drove it home, not able to top 5 miles an hour, and the cab filled with exhaust.

I was ready to pack it up and ship it to Iowa for some TLC, but first, I sent a 10 second video to Wally, my mechanic extraordinaire, who diagnosed the problem in no time. The shop had put it back together wrong. A slick “how to” video and some serious know how from my dad, and my baby is running better than ever. She still won’t top 60 mph, but that’s just fine on an island where we only go 45. Thank goodness for dad types who know their way around a VW engine!

For more fun photos of the bus check out PhotographBug!

One thought on “What Would Make You Buy An Old Volkswagen?”