The end of an era is arriving on Maui.  HC&S has announced its impending closure.  By the end of 2016, this 144 year tradition of sugar farming will be no more. 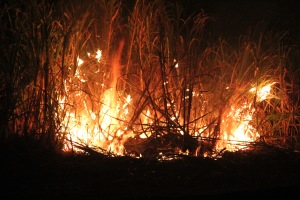 Last summer, before the announcement was made, a close friend that works at HC&S invited our family to see a spectacular sight: a cane fire, up close and personal, right as they set flame to the leaves.  It was fascinating, and hot, and left us in awe.  We had great plans to make a video of the kids dancing in front of the red sky, but all we could do was stand there with our mouths hanging open when confronted with the sheer force of the flames and the shimmering heat.  We stood 10 feet from the shooting spears of yellow and red until we couldn’t take it anymore and moved back to avoid melting our faces.  It was a memorable way to watch the first rays of sunlight peak over Haleakala that morning.

What impressed me most, besides the heat and deafening sound, was the control and science that went into this burn.  Water pipes were buried ahead of time to protect irrigation systems, multiple forecast apps were consulted to be sure inversion layers would force the smoke up high and away from homes, and backfires were planned.  It was clear this crew was a well oiled machine that had been upholding the long-standing traditions of this industry. 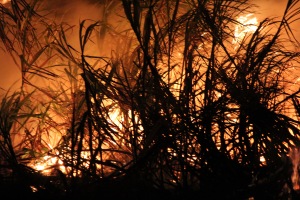 It will be hard to watch as HC&S closes down this December.  Every time I drive through central Maui  I swallow around a suspicious lump when thinking of what our island will lose.

The green of the central valley;

The industry that facilitated a culture of acceptance among people of many native lands;

The very history of the last 144 years of Maui.

I’ll enjoy these last months of waving cane, and I plan to purchase at least one 50 lb. bag of HC&S sugar before the last of it goes away.  Great taste and local grown…at least for now.

You can read more about The Day Sugar Died here, and here. 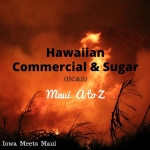