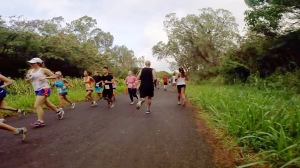 It’s not my thing.  I wish it was my thing.  I love a good walk, even a fast walk, but I can’t imagine a world where I would willingly participate in a 5K.  My brother tried to coerce me into running while I spent a summer break with him during college.  It didn’t stick.  As a young person, I took the lead in Northern California for sinking the most free throws in a basketball competition, but eventually left the sport because of the running.  I really don’t like to run, and research shows that a long brisk walk does as much for your heart (and maybe more for your knees) than running.

Despite a mild case of kinetophobia, I enjoy hearing about other’s movement oriented endeavors.  I’ve had several friends involved in the XTERRA Triathlon here on Maui, and I’m happy to cheer them on ~from a great distance.

The XTERRA Triathlon began on Maui 20 years ago, and has since become a world-wide tour.  The October 23, 2016 event will be the 21st anniversary and will come with a $105,000 purse.  Not too shabby.  The course involves swimming, mountain biking, and trail running, and I guarantee, you will not find me in the line up! 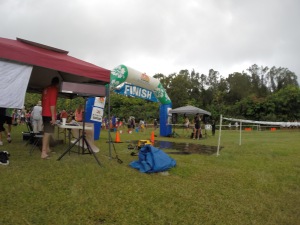 @DAHAWAIIAN_SCOOTERGUY participated last year in the XTERRA Adventure Fest Maui 5K and was happy to share a few photos from his day.

7 thoughts on “Maui A to Z: XTERRA Triathlon”